How I Survived Human Trafficking 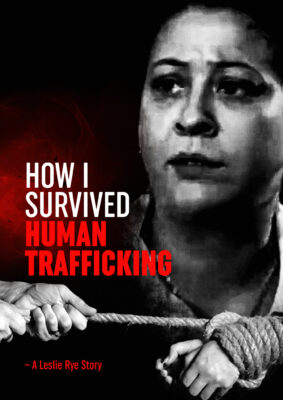 Fayetteville, NC native, Leslie Rye, shares the heartbreaking truths of her personal experiences hoping to prevent victims from falling prey to the evil world of human trafficking. Her story begins in a broken, single-family home. Raised by a hard-working mother, but a tumultuous and difficult mother-daughter relationship, nonetheless, leading to Leslie’s emancipation at 15-years old. Without the support of family at 17-years old, Leslie turns to exotic dancing for income and depends on fellow club dancers for essential necessities—like housing and transportation. Leslie’s vulnerability during this time propels her to trust and rely on groups of men and women that claimed to want to help her find stability. Unfortunately, these very groups were a part of the human trafficking ring that ultimately captured her, imprisoned her, and tortured her for years.

Leslie details her story of independence, but also the natural instinct that something was amiss the night her abductor conned her into accompanying him into a hotel room. The particulars of that night are upsetting to listen to, but what is more gut-wrenching is to hear her recall to memory through tears as she describes the night her freedom is stolen. She continues to expose the painful human trafficking journey she lived through for years with other human trafficked captives—forced sexual servitude at gunpoint, fake phone calls to family claiming she had been a drug abuser, but safe enough to prevent being searched for, constant video and audio surveillance by captors, threats of death to family members, along with physical, mental, and emotional abuse.

Toward the end of her story, Leslie reveals that an undercover sting operation was underway through a fellow human trafficked captive who had recently been returned to the ring after an arrest as a possible informant. Leslie explains the story of her liberation from the human trafficking ring during the undercover sting operation. However, Leslie also reveals her disbelief that after years of being held captive, tortured, and threatened—was freedom even possible for her?

This is Leslie’s chance to tell everyone that human trafficking is a wide-spread evil stealing innocence quickly. Her desire here is to warn everyone with her story—what the signs, the methods, and the techniques that are used in ensnaring the susceptible and trusting. She pleads with the community to be vigilant against these soulless criminals who pose as harmless threats.

These are Leslie’s words—more importantly, this is her healing—helping anyone not become the next victim. Leslie is lucky to be a survivor of these horrors, and her active fight to be a voice in the community to protect anyone from experiencing the same nightmares is truly courageous.